Once Upon A Time by Saurav Chhawchharia 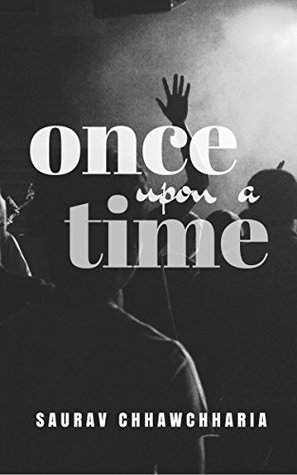 Loving is never easy. No, not loving your girlfriend. That’s easy. But loving your dreams when you have nothing and are losing from everywhere.One moment, everything seems to be going so good, so apt, so right. Another, everything vanishes into thin air. And that, my friend, is horrifying!

Samar Kaushik, a daydreamer and a nerdish high-school guy pens a novel based partly on his own past life and partly on his fancies, portraying himself as a celebrated writer having a gorgeous girlfriend and bundles of bucks!

Sahil is fifteen, sells toys at traffic signals and throws hard questions on the utility of surnames and the education system. Rizwan who serves cutting chai at squares dreams of becoming a footballer. Abdul is contented with life and is thankful that a folk has volunteered to teach them how to operate a computer when comes a day to put everything to an end and they realize that dreams can’t replicate each and everything like they do in those motivational stories and there are some constrains which poverty lays for them.

What is inscribed in their destiny? Will anyone win at their dreams? If yes, who?

This book is intense yet light, dark but witty, deep yet funny. One that brings out a heartbreaking conflict between our expectations from life and its unpleasant reality on one hand, whereas on the other, also advocates its beautiful side beyond the deceptive world of fake relations.

Once Upon A Time is a beautiful story focusing on lifestyle of slum dwellers. It also talks about the struggles of aspiring writers.

Although the concepts were nice the story could have been made into two different stories instead of one.

There were stories within these two major stories. Grandmother’s stories as well as the story of two different novels by two different characters. Initially I thought that the writer won’t be able to do justice to the plot, but I must say that the plot was very clear and the stories were distinguishable.

There were some characters who were introduced but vanished suddenly and entered again later with no clear background about their time during that period. It was difficult to keep an eye on the activities of each character.

At some places I felt like the thoughts of the writer were not organised. A very haphazard description of events.

There various incidents which proves the ignorance of the writer. At one place a character “receives a mail” (an intent letter) and only a few sentences later he is so excited that he starts dancing “holding the letter in his hands”.

At another place the same character meets an accident and a friend of his describes the accident to another friend with extreme details about how “the truck driver pressed clutch with accelerator which led to the accident”. (If my friend was involved in an accident THAT I DIDN’T WITNESS MYSELF, I would just say that the truck driver was driving blindly and not whether the driver was pressing the break or the clutch.)

It is not a story where you expect a happy or a conclusive ending. You are just a viewer of the lives of the characters, whose lives continues even after the story ends.

The story could have been much better but there were lot of speed breakers in this journey. I must say that the author adopted a difficult way of writing and tried to give full justice to all characters, but there were some noticeable faults which hindered my reading experience.

Having said that, I feel being a debut author, and trying something like this is tough. I hope and feel that the author will go a long way.