A Monsoon Lament by Nirvaan Verma 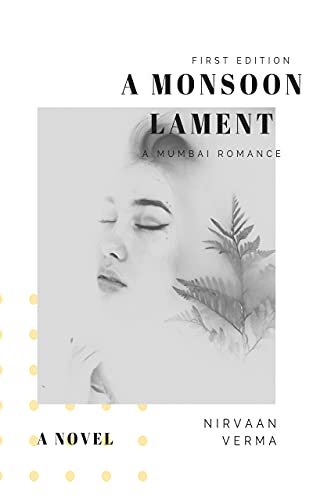 Ravin is trying to paint the image of his feminine ideal on canvas and struggling to find a girl to pose for him so that he can visualise his painting. Unable to get over the death of his ex-girlfriend, he finds a way out of his life of seclusion and obscurity, but not without costs.

Asavari loves her husband, but he is cold, uncaring and unresponsive in bed. She volunteers at an NGO and is a deeply humane person, she also paints as a hobby and listens to ghazals in her free time. She breaks the boundaries society creates for women and charts her journey of emancipation and finding her true identity.

Sharat is a successful entrepreneur but also a smooth-talking womaniser and a vandal with alpha-male characteristics. He is driven by his demons and aggressive instincts but beneath the layers of bravado hides a fragile man carrying scars from his traumatic childhood.

Evana is a supermodel who carries many insecurities, to counter them she tries to enamour young, rich men so that she can manipulate them for their money to support her expensive lifestyle. She goes on a journey of self-discovery from being a brazen pleasure-seeker to making mature life choices.

A series of crucial events and pressing circumstances lead to role reversals between the four individuals. This transformation in their personalities and personal destinies makes them discover a facet of their personality which was initially hidden from their selves.

The Monsoon Lament is an interesting take on complex human behaviour. The story is unique as many hidden and ignorable aspects of the human mind are highlighted in the story.

The reader witnesses various dilemmas in the minds of the characters. The characters second guess their judgements and make an attempt to change themselves.

Within the eight months of the story’s timeline, we see two drastically different personalities of each character.

Even though I really enjoyed the vision of the story, I despised the patriarchal narrative. Evana is a gold digger. Sharat is an abusive womaniser “but beneath the layers of bravado hides a fragile man carrying scars from his traumatic childhood” Asavari is an ideal wife “draped in a…saree, Asavari gave off the homemaker vibe” who is stuck in an unyielding marriage but tries her best to woo her husband. Ravin is a privileged guy who believes his love for art means renouncing the world and tries to force his opinion on others.

The depiction of these characters and some of their dialogues were serious cringe moments for me. Like: “Asavari always felt compelled to ask Vismay his permission to add male friends to her account.”

The characters are contradictory to themselves. For example: Vismay talks about Mumbai being modern as divorce is very normal, but he can’t talk about or have sex with his own wife because he has “very conservative ideas about sex.”

There is a lack of character development arc. 50% through the story, there is a 180-degree change in Evana and Asvari’s characters. Similarly, we later find Sharat and Ravin’s complete change of personality all too suddenly.

The story was nice, and the idea of humans being capable of complete transformation was boldly highlighted. What would have made it a better read for me is relatable characters and genuine transformation.