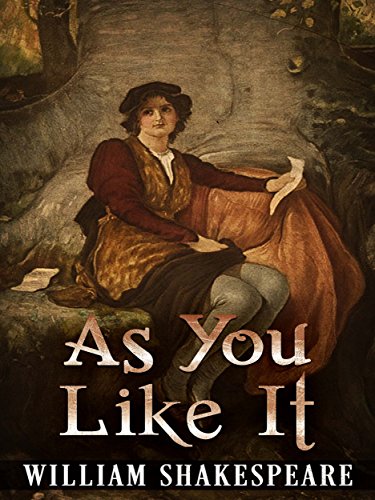 As You Like It is a story about love and family politics. Brother trying to keep brother out of legacy.

Oliver treats Orlando badly after their father’s death and takes over Orlando’s part of the inheritance. On the other hand, Celia’s father deposes Rosalind’s father, his brother. This politics though help in bringing the characters together and completing the story.

In a wrestling match, Rosalind sees Orlando and is impressed by his wrestling skills. She gifts him a chain, and they fall in love without revealing their feelings to each other.

When Orlando comes to know that Oliver has been trying to kill him, he runs away and reaches the Forest of Arden, where he carves Rosalind’s name on trees with poems dedicated to her.

Rosalind runs away from her house when threatened by her uncle, Celia’s father, Duke Frederick. Celia and Touchstone accompany her to the Forest of Arden, disguising themselves—Rosalind as a gentleman named Ganymede and Celia as a shepherdess named Aliena.

Rosalind notices the carvings and is informed by Celia that it is none other than Orlando.

The entire story unfolds as Rosalind confronts Orlando as Ganymede about Orlando’s love for Rosalind.

As You Like It is a light-hearted story about love-at-first-sight. The story takes various funny twists as more characters add on. It is a short read. I was able to finish it in 3-4 hours.

I love the simplicity of the story. The majority of the story is set in a forest, where the characters are far away from their titles and wealth, living their lives in exile.

The story had a scope to add more details about the brothers’ enmity. What I didn’t like in the story was Phoebe being married off to Silvius even though she didn’t like him, and Oliver’s feelings for Orlando and the sudden change in it.

Nevertheless, the characters are really interesting and well crafted. They have strong opinions and don’t hesitate from voicing them in front of others.

Rosalind: Rosalind is a smart, strong, soft-hearted, and clever character. She is wise with words and knows how to influence someone. When she disguises herself as Ganymede, a handsome young man, she becomes a Love Guru for Orlando, Silvius, and Phoebe and executes the happy ending in the story. She is the best character in the entire play.

Orlando: Orlando is an attractive young man. Being neglected by his brother, he lacks education and gentlemanly qualities. However, he believes he has great potential. Victory in the wrestling match proves the same. He is a hopeless romantic and shows it by carving Rosalind’s name and poetries dedicated to her on trees. He takes Ganymede’s (Rosalind’s) advice and tries to become a better lover.

Celia: Celia, Rosalind’s cousin, is a warm and emotional character. She decides to follow Rosalind into exile in disguise of Aliena, a shepherdess, and falls in love with Oliver.

Oliver: Oliver is a cruel brother. He does every possible thing to get his brother, Orlando, out and even attempts to get him killed in the wrestling match. Celia’s father employs Oliver to find his missing brother (Rosalind’s father). Oliver’s character takes a 180° turn when Orlando saves him from a hungry lioness. He later falls in love with Celia.

Though the story is interesting, a bit more details and characters’ backstories could have been a plus point.

Recommended if you are a Shakespeare fan or want to try something new (classics, plays).