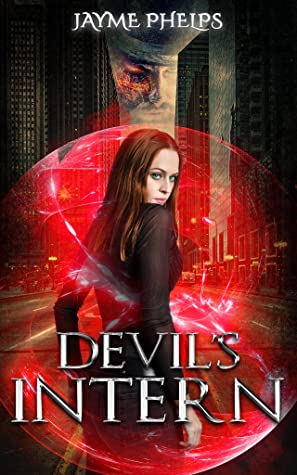 After making a deal with the Devil, Anna Westfall is now in her own personal hell on earth. The thing is, she now has the ability to make deals of her own. With great power comes even higher stakes. Now, will she do what’s right to save her friend from the same fate?

Devil’s Intern is a story about Anna who is dead and is now serving her sentence on the Earth. A pure fantasy fiction, it is a unique take on life after death and soul reaping as understood by different religions. In this story, the people who are dead are either sent to hell or made to stay on the Earth to serve their sentence. Despite being on the Earth and living a pretty much human life, they can’t meet their loved ones and are guided by serious principles, which if not followed can lead them to the prism—the jail of their worst fears.

The title is relevant, but I found the cover to not be the right representation of the plot. The surroundings give no idea about the setting of the story. The personality of the characters as described in the story does not seem to be the same as depicted in the picture.

Language is lucid and easy to understand. The story is well-paced and keeps the reader hooked from the beginning when one is introduced to the scene and an exciting world of witches, warlocks, vampires, and psychics.

Characters are rounded and serve their purpose well.

The story is written in first person, past tense. The author takes a quick detour through a flashback to tell us about Anna’s back story and later, the story unfolds chronologically.

There were several questions in story that were left unanswered and have a scope for further development. But I am hoping that those would be answered in the upcoming sequel.

Definitely recommended if you are looking for a unique theme in fantasy genre and an easy read.