Final Delivery and Eight Others by Mark Thorson 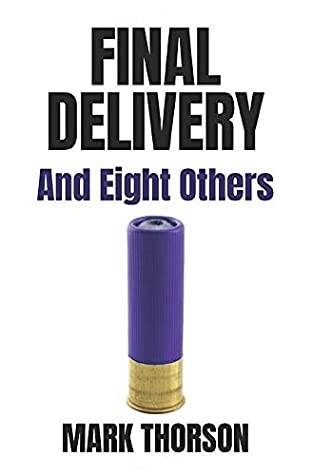 Final Delivery is a collection of stories set in or connected to, far northern landscapes with characters who have either made a decision, or are about to make one, that will change their life’s trajectory—often in a manner or direction that they had not anticipated. A Professor of Ethics hires an assassin, a despondent trust fund baby who tries his hand at running drugs, and there are two good old northern boys who have always lived for the hunt, the kill, but have never contemplated death. These are stories about change, about awakenings, about paths that are chosen without clarity of what those paths hold. There’s a failed Hollywood screenwriter, a washed-up NHL hockey player, and an under accomplished woman who married the wrong man—all at the brink of life’s fragile breaking point. There’s a small-town braggart who is about to meet his father for the first time, and also a lonely checkout girl in her final days, who lived her life without ever asserting herself.

These stories in Final Delivery cross through race, culture, politics, and religion with unique characters who are faced with the simple struggles in life that challenge us all.

“Final Delivery” is a collection of nine short stories across genres—Slice of Life, Inspirational, Emotional, and Thriller. All the stories talk about different feelings the characters are going through. We see the characters confused, scared, nostalgic, inspired, broken, and frustrated. The emotions feel real.

The writing style is easy to understand. The writer has done a great job at providing very visual descriptions of the characters and locations.

I really loved the story “The Gift”. It is the most descriptive and is very motivational. The story is about a young ice hockey prodigy whose ideal is the Great Magician. His ideal inspires him to work on the details of his sport and achieve great levels of fame.

The first story, “The Dope Runner”, is about the guilt of doing illegal work and the constant fears attached to it. The story is well written. The character, Jake, is involved in some illegal task. Even though he has completed it, he has apprehensions and is worried that something wrong might happen. It talks about the dilemmas faced by people who have done something wrong. The ending was smartly written.

“Fifty Dollars Assassin” is a story about a professor hiring an assassin. It is another story about inner fears and concerns as you are not sure if you are right or wrong. Here the professor is scared of losing his 18 years youngers wife to a fit and handsome assassin. The presentation of his wife’s emotions and the professor’s jealousy is subtle but prominent in the story.

“Malfunction Junction” is Chet and Howard’s trip on a hunting day. The simple plot turns pretty dark pretty quick. I loved the drastic contrast of the characters’ personalities.

“A Trip Back Down” is a banished ice hockey player’s life story. Watching the kids play the game reminds him of his earlier times. On being asked by the kids what it is like to have been, he shares the reality of life with them. A not-so-hopeful but the truth of life.

“Last Stop at the Stop ‘N Go” is a dying girl’s slice of life where she tries to speak out her feelings but fails.

“Stranger’s Day” is the story of a guy called Space who has never met his father. And then one day, finally, it was decided that they were going to meet. We see him wait for his father while having a conversation with a stranger. The story is an emotional one.

Ellen Ray had been having a hard time with her husband. “A Good Piece Is Hard To Find” is about her trip to a bar where she finally tries to acknowledge her feelings.

“Final Delivery” is a dark and depressive story of a frustrated Dominos delivery guy.

All the stories are vastly different from one another and take the reader to new worlds and time periods.

Recommended if you are looking for an emotionally connecting read.