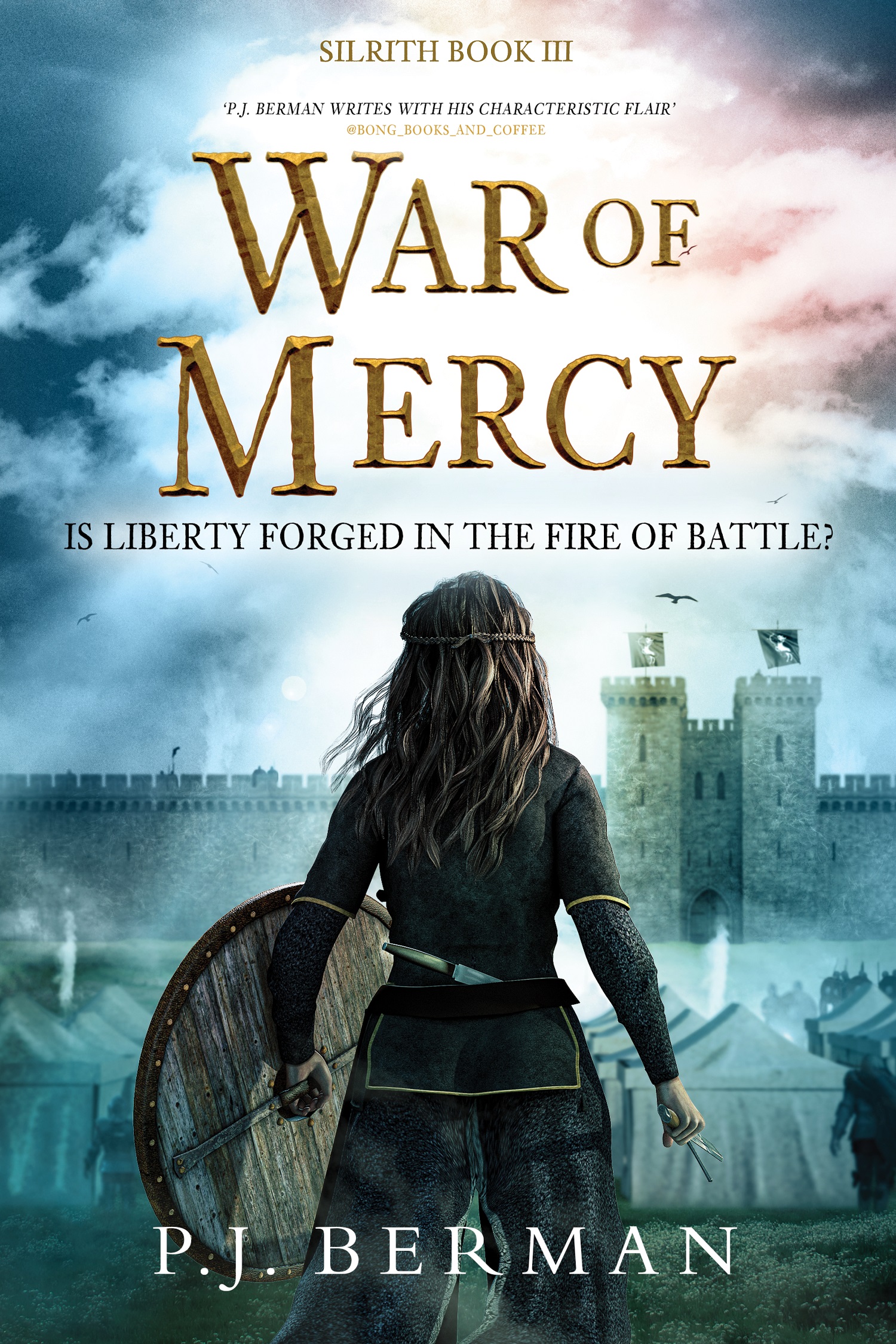 War of Mercy is the third novel in P.J.Berman’s Silrith series.

Bennvika’s civil war has spilt beyond its borders.

In a desperate bid to regain a foothold on regional power, Silrith, the rightful Queen of Bennvika, has pushed the Etrovansian despot, Ravla, back to the Dunestra River. But the army blocking her path is far from the only mortal peril she faces.

Across the sea, Bennvika itself is in chaos. Nobody holds sway over the entire nation, though many claim it as multiple factions vie for supremacy.

The bloody conflict of attrition continues. Can Silrith bring an end to the widespread suffering? Or does fate have other plans?

The war begins with a basic fight for rights. When Silrith was taken down her throne with trickery by Jostan, she vowed to earn back her Kingdom. The fight was between Silrith and Ezrina (who were wrongly thrown off their thrones); Jostan (who wanted to colonise the entire Kingdom of Bennvika); and Zethun (who wanted democracy). The simple agenda has turned into politics and the greed of people to rule the kingdom or just parts of it will make them do anything. The allies can’t be trusted and the foes can’t be understood.

War of Mercy, like any other book by P. J. Berman, starts with chaos. Everything is a mess. There are attacks being planned by some while the others are trying to keep their heads low to keep themselves safe and come up with a strategy. We see innovative strategies being discussed and plotted, but there are hardly any wars throughout the story except in the beginning and at the end.

The writing style, as always, is brilliant, and the story keeps you hooked right from the beginning. Silrith becomes more resolute than ever. With her guides and mentors now gone, she has to make some real decisions, which she does without a flinch.

Ezrina is another powerful character that I have loved immensely since the beginning of the series. However, she is overshadowed in this part. I desperately wish more could have been done with her strong personality and patriotism towards her tribe.

Jostan’s role is very minimal and unmemorable in this book. Other kingdoms’ leaders’ fights and strategies make up most of the book. Bezekarl suddenly takes a centre stage and evolves to become much more powerful than in the previous books.

Zethun and Fayenda’s role come towards the end of the book and creates a bridge to the upcoming sequel.

I felt that a lot more could have been done with the characters.

As you would expect from this genre, many characters die. How the story took a turn was unpredictable and disheartening. But as you say, everything is fair in love and war. Well, this is a war and pretty brutal at that. You lose a lot to gain something in wars like these.

I really hope that the next book comes with a lot more plot twists and stronger than ever characters.