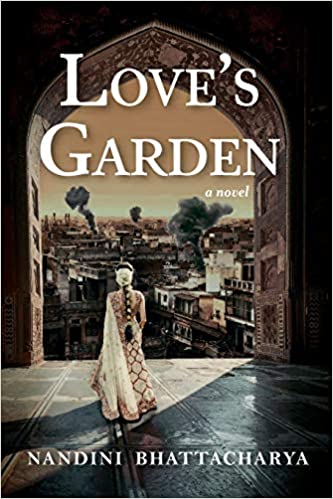 It is 1898. India is ruled by the British, and India’s women are ruled by British masters as well as Indian men. A desperate young widow sacrifices her firstborn child to save herself from ultimate dishonor. She marries a stranger, but her damaged second family pays dearly for this Faustian bargain. Then, an extraordinary atonement, strange liaisons in politics and love—spanning the two world wars and the Indian independence movement—help her descendants heal from this traumatic private history. Love’s Garden demonstrates the strength, resilience, and unbreakable spirit of mothers and daughters navigating layers of oppression, all while the sun is not-so-peacefully setting on British India.

Love’s Garden is set in the 1890s and gives the reader an essence of India’s state of affairs under the British Raj. There is a divide between the Indians who love their country and those who try to impress the Britishers in hope of incentives.

Love’s Garden is Prem’s journey in that era from being unwanted by her own mother to being a mother not just to her own son but also to her husband’s son and best friend’s daughter. The reader goes through all the phases of her life—unaccepted daughter, friendship, blooming love, broken heart, hard-headed wife, and motherly sacrifices.

I love the origin of the title “Love’s Garden”, which is basically derived from two best friends’ name Prem (means love) and Kanan (means garden). Even though Kanan’s role is limited, her essence is felt till the end of the story. The cover is generic and not a representation of the plot.

Even though Prem is the main character, I couldn’t ignore the powerful portrayal of her mother’s character. Readers see Saroj as a weird person who doesn’t talk to anyone. Not even to her husband and daughter. As the story unfolds, the reader is able to understand her better and empathise with her. It definitely is the character that would leave its mark on the reader for a long time.

Love’s Garden is published by Aubade Publishing. What I couldn’t help but notice was that the book is heavy, has white paper instead of cream paper, and narrow margins, which makes it look like an essay book or a textbook than a novel. Also, because of the white paper, the book is pretty expensive compared to other books of the same genre and of similar length. The font was inconsistent. At some places, the name of one character was miswritten as another character’s name. The reading level of the book is difficult.

Though the story is great, it was difficult to read because of these reasons. Nonetheless, I enjoyed the story and would like to read more by this author.