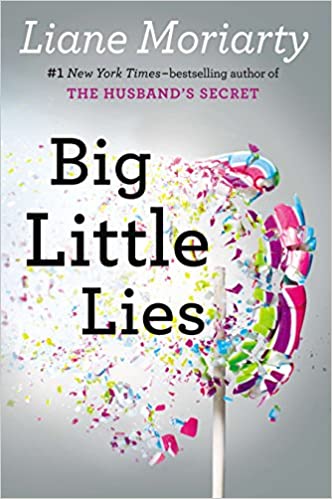 Perfect families, perfect houses, perfect lives. Three mothers, Jane, Madeline, and Celeste appear to have it all until they find out just how easy it is for one little lie to spiral out of control . . . Single mum, Jane has just moved to town. She’s got her little boy in tow—plus a secret she’s been carrying for five years. On the first day of the school run, she meets Madeline—a force to be reckoned with, who remembers everything and forgives no one—and Celeste, the kind of beautiful woman who makes the world stop and stare but is inexplicably ill at ease. They both take Jane under their wing—while careful to keep their own secrets under wraps. But a minor incident involving the children of all three women rapidly escalates: playground whispers become spiteful rumours until no one can tell the truth from the lies . . . It was always going to end in tears, but how did it end in murder?

“Big Little Lies” is set on a scenic peninsula in Australia, near one of the world’s most beautiful beaches. It is a small town. Everyone knows everyone, either through the school, cafe, parlour, or kids’ sports practice. Everyone—rich or not so rich, working or a stay-at-home parent—stays together in this small town.

The story revolves around the Kindergarten students of Pirriwee Public School, their parents, and everyone’s secrets. The new session is about to start at Pirriwee, but life is already a mess for the students, parents, and teachers.

The opening scene is of an “Audrey Hepburn and Elvis Presley” themed Trivia Night at the school, where everyone is dressed as Audrey or Elvis. There is a lot of chaos going on, rumours spreading, Detective Sergeant Adrian Quinlan taking statements of the parents and the teachers, and a death.

We are then taken to the orientation day which was held six months before the trivia night. Jane’s son, Ziggy is blamed for trying to choke Amabelle, another kindergartner. And when the death of a character takes place at the Trivia Night, people suspect a foul play. Dots are being connected since the day of orientation to the day of Trivia Night.

It is a light read, dealing with heavy issues. The plot runs around the theme of Bullying and Domestic Violence. It makes one ponder over the idea that how much can the family environment or “genes” affect the mentality of a child? The heaviness of the story is easily subsided by the humourous tone of Madeline, typical parenting issues of the parents, and circumlocuting statements of the suspects/witnesses regarding the incident.

I felt that the book had a smart ending.

The story is gripping, sad, and funny. I finished the book in 2 days. I just wanted to know what has actually happened. Liane Moriarity is able to create characters with emotional depth. I felt connected to every character of the story. The author’s writing style is easy to get into and keeps you hooked while also talking about grave issues.

Definitely recommended if you are looking for a light thriller.