Cure of Umba by Samuel Jukes 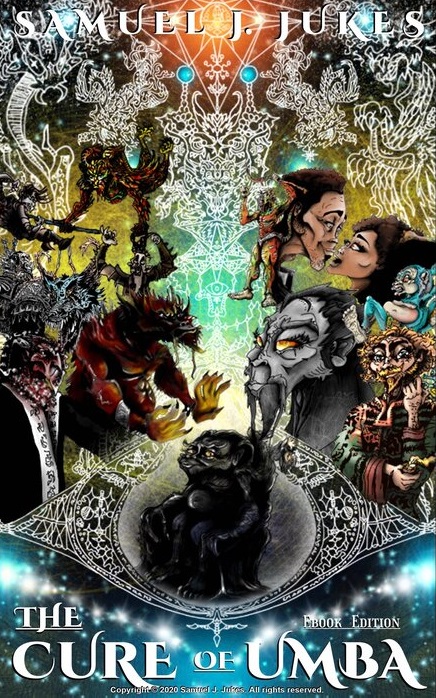 Early in the Third Age of Umbarra, a prophecy was told. Upon the great mountain spires of the magik races, the minds of Umba’s first beings conjured a great vision, and in it, they saw the future. Two fates of the world they lived upon, they saw its end and a new beginning. The evil that seeped from the blackness and the good that would come to keep them. The boy from the red sun must fall and the slaves of the fiery sea must climb to heal them all.

Upon the streets of his township, life is rough for the homeless Redmond Daniels. The balance between right and wrong hangs delicately in a world of harsh reality. Pressured into gang life, Red’s choices lead him to crisis point, and he is forced to embark on a journey of self-discovery.

His only fatherly influence, the elder, Mark Sinoda has a hidden past. The keeper of ancient knowledge, he has set foot on new worlds and the time had come to pass his great truth to the one he must. In search of a miracle cure for his closest friend, Red must entrust in Mark’s promises as he dreams of venturing beyond the broken streets of his African home to retrieve a great elixir to heal the woes of others.
Forced far from his home, Red is cast into a new life upon a sacred temple, where he would come to learn of his forgotten ancestors and by sheer stubbornness and willing, he must overcome the challenges of the mind and tests from a new world. A world called Umba, where the lands he must travel too are brewing.

The powers that be, readying for an assault upon the lands of the east, Red finds himself faced with the impossible task of traveling to Umba’s forgotten far north amid the chaos of war. To succeed, he must overcome and evolve as he steps forth to a new destiny. Unable to face his trials alone, Red finds an unlikely companion in a foreign being. Son of a great leader of the east, Errawak Esohh must unearth his own fate as he unravels the mystery of Red’s discovery and guides him towards the lands of his forefathers where the impossible cure of Umba awaits.

As I start to talk about Samuel Juke’s Fantasy fiction—The Cure of Umba, I would first of all like to appreciate the very intricately designed book cover. The book cover is one of the best I have ever seen. The cover itself keeps you engaged with a variety of characters depicted on it.

During a quick chat with the author, he revealed, “I do them myself. I was an illustrator long before I started writing. This one took me a while, there was a lot of individual drawings that went into it. Guess it’s inspired by 90s Street fighter and anime covers.” Well, this cover definitely is worth all the efforts.

Talking about the plot of the book, it is quite unique to whatever I have read till now in this genre. The book is initially set in Africa, where the reader is introduced to Redmond Daniels. Red then travels to mystical land of Umba to find a cure for his friend’s ailment.

The book offers a promising beginning. It introduces the readers to all the kingdoms of Umba and the kind of people (read: aliens) living there at the beginning. This introduction really excited me to know what this unique world had to offer, what these aliens with different kind of power had to offer, and what the book had to offer.

After all the hype that author was able to create in the first few pages, the thing that acted as a turn off for me was the characters not being properly introduced. Sufficient details were not provided about their looks and personality.

Given that the characters are basically aliens with totally different looks than a normal human being (as can also be seen in the cover), it becomes important to describe them from their hair to their toe nail. I would have loved if the characters were presented as beautifully in the text as they were on the cover. Some characters though, were more graphically described than others. I really enjoyed the description of the dark world. It was more detailed than the others.

Writing style is a bit difficult to get into, hence, slows down the pace of reading. While reading the book, I couldn’t help myself but think about the TV Show—F.R.I.E.N.D.S.

Remember the scene where Joey is supposed to write a recommendation for Monica and Chandler? Joey meant to write “They’re warm, nice people with big hearts.” But instead, with the help of thesaurus he writes, “They’re humid, prepossessing homo sapiens with full-sized aortic pumps.” That is how a pretty large part of the book seems like. Take these for example: “His joy was apparent in his bulbous, and glazed eyes that twinkled as if encapsulating the ocean’s abyss.” “He wrenched his blade from the earth and twisted to strike his illusive opponent, only to gouge his arm in a slash of flesh.”

I couldn’t help but notice lack of editing in the book.

My pace while reading the book was slow, but did I enjoy reading it? Yes. I loved the characters. I loved their conversations with each other. I loved how the emotions of greed, power, love, friendship, and patriotism are shown throughout.

The book ends with a nice message about miracles, religion, God, and higher power. I was definitely not expecting such a message. But it was a warm welcome.

Author’s love for animals is pretty visible throughout the novel. I don’t think any animal has not got a mention in the book. From an ant to a Bengal Tiger, the author hasn’t missed any. “His leading hand followed the floor like a snake as he pointed his palm down above his foot.” “His much swifter foe jumped high above him as he tucked one knee to his core and the other behind him like a leopard’s tail.” It was fun to see what animal is going to come up next and how.

I loved the plot and story of the book and would not mind reading more from the author.