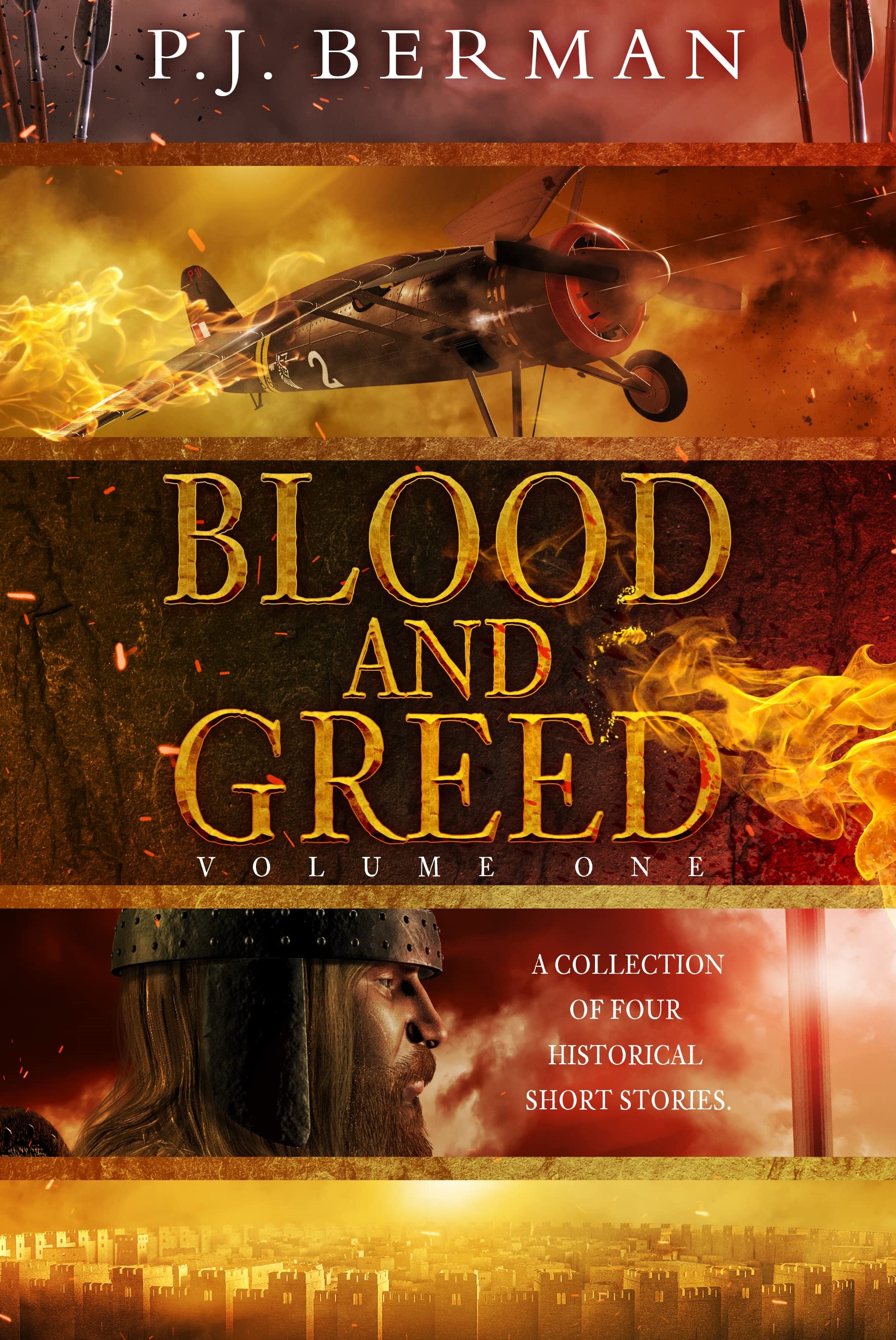 Award-winning fantasy author P.J. Berman steps into new territory by releasing four historical short stories of how the greed of the few costs the blood of the many.

A Bloody Day at Marathon After his home is destroyed and his family slaughtered, Theodosius thirsts for revenge.

The Spirit of Poland Poland stands alone - and it’s fighting for its life. A handful of brave pilots embody the country’s defiance in the face of annihilation.

Split Loyalties Its glory days may be over, but even in the tumult that engulfs the Western Roman Empire, Sigeric and Licinia are forced to wonder, does love really conquer all, or is that the preserve of the Roman legions?

The Fate of Mari Carrying messages throughout the city of Mari is Bashaa’s life, but under the shadow of advancing enemies, his path is about to take a turn he could never have predicted.

Blood and Greed is a collection of four historical short stories. The first third of the book consists of three short stories, while the remaining two-third is just one story. The title and the cover blend perfectly with the story.

Each story is different from each other, in terms of setting, plot, and characters, but what is common between all the stories, is that there is an ongoing war - for freedom, or for greed. These stories remind us of the stupid human nature. A war may have one winner, but clearly both the parties are at loss because of all the bloodshed.

I liked each of the stories. The fact that the author didn’t focus on making the protagonists win the wars really made the read enjoyable. Sadly, this book is not as well-edited as P.J. Berman’s all the other books are. But it didn’t deter me from enjoying the book.

I loved how the author is able to create 4 different worlds in so few words. Having read his 2 full-length novels (of the Silrith Series) my concern before picking the book was - how can he write 4 stories in less than 90 pages. But I never felt any lack in the world-building. Each and every scene was just as detailed and visual as all of his other writings. The book takes you on the journey through 4 different eras and locations, from Erteria, Greece in 490 BCE, to 116th Fighter Escadrille, Poland in September 1939, to Gaul, Western Roman Empire, in early fifth century CE, and finally to The Kingdom of Mari, Mesopotamia in 1761 BCE.

The characters are wholesome. Even in the shortness of the stories, the author is able to present them in a way that make them likable and real. They are courageous and stand for what they feel is right. Their love for their nation is as strong as their love for family or crush. We see strong female characters - the best thing about any PJ Berman story - without being differentiated in the strengths and vigour of male characters.

If you are into historical fiction, or just want to try this genre, then this book is definitely recommended.