King of the Republic by P. J. Berman 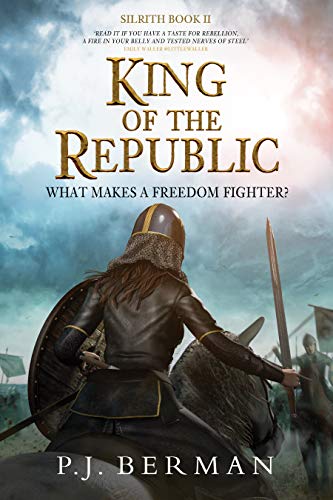 King of the Republic is the second novel in P.J.Berman’s explosive Silrith series, a new power in the world of epic fantasy.

Queen Silrith has fallen. Now she must rise again. However, when her army lands in Etrovansia in search of reinforcements and political support, their welcome is far from warm. Their retreat from one war could start another.

Ezrina, a vengeful Hentani priestess, feels the weight of expectation placed on her by her tribe. Without Jezna by her side, her headship is a lonely one. Will the arrival of strange new allies prove a welcome help or complicate matters further?

Zethun, an ambitious young politician, rides a wave of public support amid the passion of revolution. Now he must restore order before the mob descends into anarchy.

All three rebels stand on the precipice of their defining moments. There is no going back now.

King of the Republic is the second book in the Silrith Series. Action, drama, suspense and a lot of battles. It has everything. A rightful queen’s fight for her kingdom, a politician fighting for democracy, and a young girl fighting to avenge the oppression of her tribe. Different motives but a common enemy. King Jostan - a tyrannical king who wants to rule the world and spread his religion among the masses.

What started simply as a fight between right and wrong in book 1 has turned more complex with the boundaries of truths and lies now turning blur. As we move further in the plot we can see some serious politics and superficial alliances.

I love the character development in this book. The characters come up with stronger personalities. A lot of new characters were introduced in this book, and the author was able to pull it off really well. Each character had its own space, personality, and role to play in the story. A lot of strong-headed women in a story is something which is not very common in books. The author just brings us that - Women with “I want it, I’ll get it” attitude.

The writing style of PJ Berman is very detailed. He makes sure that the reader gets the full picture of the scene. From the lack of resources and people to the emotions expressed not in words, but through action, the reader is not just a viewer but a part of the story.

Needless to say, the book is full of unexpected twists and turns and ends on a cliffhanger, leaving you waiting for the release of part 3.

After reading this book, I really recommend the series even more.

You should definitely check out the audiobook by Chris Dukes @chrisdukes93