Vengeance of Hope by P.J. Berman 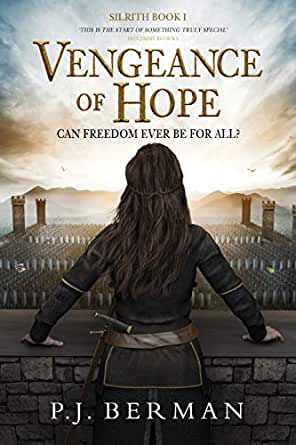 Vengeance of Hope, P.J.Berman’s explosive debut novel, marks the beginning of the Silrith series; a new power in the world of epic fantasy.

This opening book pitches you head first into the intense and unrelentingly dangerous Kingdom of Bennvika, a world of strong, powerful women and ambitious, ruthless men. As a bitter power struggle surges through the land, you are just as likely to die in a devious political plot as you are in the carnage of a great, bloody battle.

Your ears will ring with the clang of steel on steel. Your heart will tremble at the thundering of charging hooves. You will feel the cut and slash of blades as you follow three very different rebels in their desperate fight against a tyrannical King.

Silrith, the exiled Princess of Bennvika, stands shoulder to shoulder with her followers, sword in hand, ready to defend those in need of her protection. Yet she knows that if she falls, thousands more will also perish.

Ezrina, of the Hentani tribe, burns with desire for revenge against those who oppress her people, but more than anything she must fight to protect the woman she could be executed for loving.

Zethun, an ambitious young politician, yearns for a fairer world with a greater voice for the poor. However, for him and his followers, to speak the word ‘republic’, could be a fatally dangerous move in a land ruled by a despot. Will the rebel factions succeed? Or in the indiscriminate butchery of war, will their disunity prove to be their downfall, bringing about the destruction of their world as they know it?

With vivid imagery, a punchy writing voice, detailed worldbuilding and an unapologetically fast pace, Vengeance of Hope has everything an epic fantasy novel needs.

A queen turned warrior, a rebel protecting her tribe and an ambitious politician. All of them fight individually against one, the self proclaimed King of the Empire of Bennvika.

“Your ears will ring with the clang of steel on steel. Your heart will tremble at the thundering of charging hooves. You will feel the cut and slash of blades as you follow three very different rebels in their desperate fight against a tyrannical King.” (Extract from blurb)

This was my first try at reading a fantasy (except Mahabharata and Ramayana. I studied those in my school and even gave exam as those were a part of curriculum). So this first try was definitely worth it. I really enjoyed the story, the characters and the plot.

The reason for a war is generally one amongst these (a) to acquire more land and hence wealth and power (b) to spread your culture/religion (c) revenge. But this book has it all. A greedy king who wants power to rule and also force his religious beliefs on the citizens. And a rightful Queen, who has been wrongly thrown away from the throne, who wants to avenge her father’s death and take up the throne for the well being of her Kingdom.

The character development was amazing. Each character had a strong role and visibility. Powerful women, greedy men, ambitious politicians, and clueless masses. Everyone has their roles and those are written really well.

Even with so much of fictional characters, locations, and terms, the author has tried to create a realistic world which is not at all boring and keeps you hooked to know ‘what next?’.

I can’t wait for the second part in the series - King of the Republic which is due to be released in December, 2019

You must checkout the audio book of Vengeance Of Hope which is to be released in July, 2019. (Narrated by @chrisdukes93)