The Diary on the Fifth Floor by Raisha Lalwani 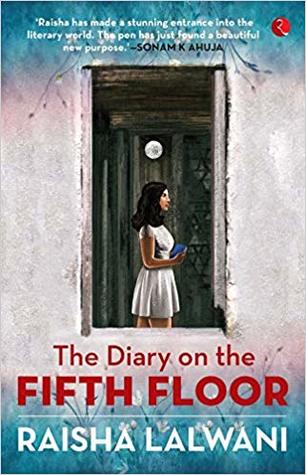 A woman leaves her infant at home but finds her on a busy street in an unexpected turn of events. Another woman wakes up in a flight hours later, befuddled, in the strangest circumstance. A fascinating tale of a twenty-five-year-old woman that takes hold of us from the moment she enters the fifth floor of a hospital; more precisely, the psychiatric ward. Visibly terrified, she clutches at her clothbound diary, caught in the horns of a terrible dilemma—whether or not to hand over the diary to the doctor. She fears that she will be declared insane if her tangled web of thoughts unspooling in dark mysterious stories is read by the dissecting eye of a doctor. What does this diary contain? As the novel progresses, we are drawn into characters and stories that are toe-curling, strange, and haunting in their raw intensity. What is the story of this woman? What secrets lie in the pages of her diary? And most importantly, what happens on the fifth floor?

The Diary on the Fifth Floor is a story about a young lady Savannah Khanna who is visiting a psychiatrist. Savannah is initially reluctant to see one but gradually open ups to the doctor and shows her the diary in which she writes shorts stories.

These entries emphasises on the negative side of the society. Breakups, thefts, murders and abortions are the major topics around which the entries revolve. The diary entries show us a very real face of the society. The face which is usually seen in the newspaper headlines, heard on television as breaking news. The observations made by Savannah or we can say the author (Raisha Lalwani) are critical and brutally honest.

Even after several attempts made by the psychiatrist to introduce Savannah to the positive side of world, it is difficult for Savannah to accept the same, owing to her past memories since her childhood. And we can’t blame her for her perspective of world.

Raisha Lalwani has adopted a really simple yet a mesmerizing style of writing. The stories ends on unpredictable notes and makes you crave for more.

I loved the way the stories were written. As if questioning the society. Showing a mirror to the society and warning them to stop before the scenario worsens.

I would like to give a disclaimer if you are thinking about reading this book. Don’t hope to find positivity in the stories. Doing so will just make you feel worse about the world and the society you live in. Think of the book as a critique, which is finding faults in you, the society and the world and you as an individual need to work on improving yourself and hence the world. “Change begins with you.”