The Imperial Alchemist by A. H. Wang 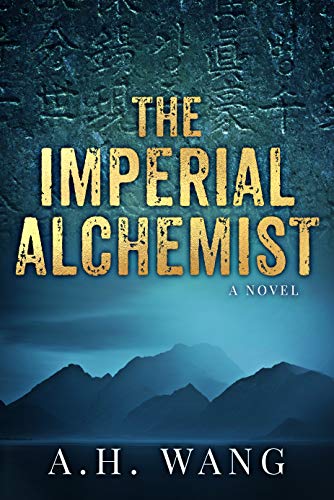 UA legend buried for 2000 years. A woman compelled to uncover the truth.

210 BCE, CHINA. The most powerful emperor China has ever known is on the brink of death. In desperation, he sends his most gifted alchemist and sorcerer on a quest for the mythical elixir of life.

NOW, world-renowned archaeologist Georgia Lee is compelled to hunt for a mysterious man who may hold the secret to the greatest discovery in human history. Her search takes her on a thrilling journey from an ancient tomb in China, through traditional Japan, to the blistering Australian outback, and the dizzying heights of verdant mountains in tropical Taiwan. But what begins as an investigation into an archaeological riddle turns into something very sinister. Georgia starts to suspect that perhaps she is the one being hunted instead….

Meticulously researched, this is a tale interwoven with rich historical facts to recreate all the drama, intrigue and mystery of East Asian culture.

What if someone tells you that there exists elixir somewhere in the world, making the person immortal who drinks it. Would you believe it?

The Imperial Alchemist takes you on one such adventure trip. Georgia, an archaeologist is assigned the task of finding the elixir by a business tycoon Mr. Lambert. The task is much difficult then it seems and much twisted then you would expect. Georgia who first thinks it is just an unrealistic demand of a copious businessman, soon realises it is well planned conspiracy.

The story takes place in China, Japan and Taiwan. It unfolds beautifully, disclosing right amount of information at right time.

The story is part historical, part mythical, and part legend, and many of its characters are based on actual historical figures.

Though it contains lot of historical content but it never seems boring. The author has clearly done a detailed research about each and everything related to Qin Dynasty, Hsu Fu and the places where the story takes place. The writing style is brilliant.

The character development is really interesting. They are very realistic. Every character gets it’s fair share of role in the story. You feel emotionally connected to them even if that character has no present existence.

The story ends with decent amount of lose ends to be caught up within the sequel. I couldn’t stop myself from finishing the book. Neither did I want it to get over so soon. Desperately waiting for the release of the sequel.

If you like to read history, mystery, adventure or thriller then this book is definitely for you. Even if you are not very keen about these genres then this is the book which will make you a fan of these genres. (I am was not a history enthusiast either.)