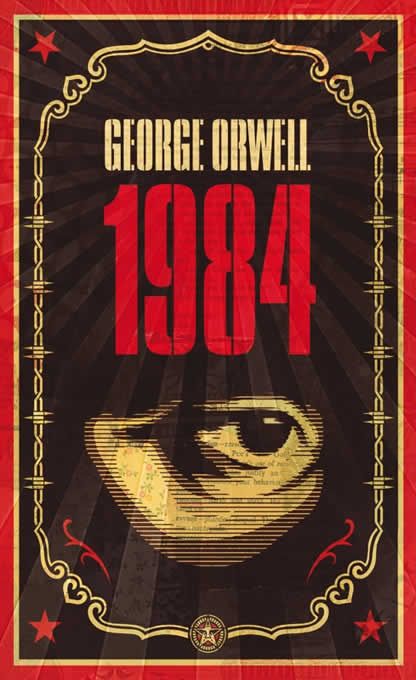 The year 1984 has come and gone, but George Orwell’s prophetic, nightmarish vision in 1949 of the world we were becoming is timelier than ever. 1984 is still the great modern classic of “negative utopia”—a startlingly original and haunting novel that creates an imaginary world that is completely convincing, from the first sentence to the last four words. No one can deny the novel’s hold on the imaginations of whole generations, or the power of its admonitions—a power that seems to grow, not lessen, with the passage of time.

The Government (known as The Party) wants to exercise control over everything. All the houses have telescreens, to keep the people constantly under surveillance . What the people do, speak, read, write, eat, drink or even THINK, It wants to monitor everything. Anything which might breed rebellion is forbidden.

Children are influenced to act as eyes and ears of The Party since their early ages. Woman are taught to have sex just to produce offsprings and are not supposed to enjoy it.

The Party also makes sure that the minds of people are filled with thoughts that It desires. Thinking about anything else is a thoughtcrime and is punishable. For the same reason The Party has created a new language Newspeak, which focuses on translating all the unnecessary words into easier ones. For example ‘bad’ became ungood hence eliminating the word ‘bad’. It also tries to eliminate words which promotes people to think of any kind of thoughtcrime.

“Don’t you see that the whole aim of Newspeak is to narrow the range of thought? In the end we shall make thoughtcrime literally impossible, because there will be no words in which to express it.”

According to The Party, if it says 2+2=5, then it is. No questions asked, no counter arguments made, no logic required.

The Party has manipulated the minds of people in such a way that they have stopped being affected by how The Party is constantly updating the history as per its choice. They accept everything as if it was always supposed to be that way.

“Every record has been destroyed or falsified, every book rewritten, every picture has been repainted, every statue and street building has been renamed, every date has been altered. And the process is continuing day by day and minute by minute. History has stopped. Nothing exists except an endless present in which the Party is always right.

Winston does not want to except this. He is a rebel. He realizes the importance of freedom. Rebels are rare but they exist. But rebellion is something not acceptable by The Party. Whoever tries to rebel is tortured till he/she accepts the principles of the party and start loving and respecting it truly.

“Sometimes they threaten you with something - something you can’t stand up to, can’t even think about. And then you say, “Don’t do it to me, do it to somebody else, do it to So-and-so.” … You WANT it to happen to the other person. You don’t give a damn what they suffer. All you care is yourself.”

That is the time when The Party can make you do or confess anything it wants.

It could simply kill the rebels. But hating The Party is a freedom for people which is not bearable by It. So It transforms the rebels. Until they accept that everything that The Party has stated is correct. They generate love for The Party in their hearts.

In the end The Party is the only truth. There is nothing after or before It.

This novel is very thoughtfully written. When we see the media being corrupt and facts being distorted, we acknowledge the importance of truth and freedom. George Orwell shows us our future in a simple yet a heart touching way. And if money and power is started to be used in the way as forecasted by Orwell, it won’t be long enough that it ends the same way.